Even the Supreme Court Thinks NCAA Amateurism Is a Farce

Ringer Illustration A unanimous ruling from the nation’s highest court might not be a death knell for the NCAA’s business model, but it clearly and devastatingly exposes the facade upon which the entire enterprise rests The NCAA is an empire built on a loophole the size of a postage stamp. Every palatial college sports stadium 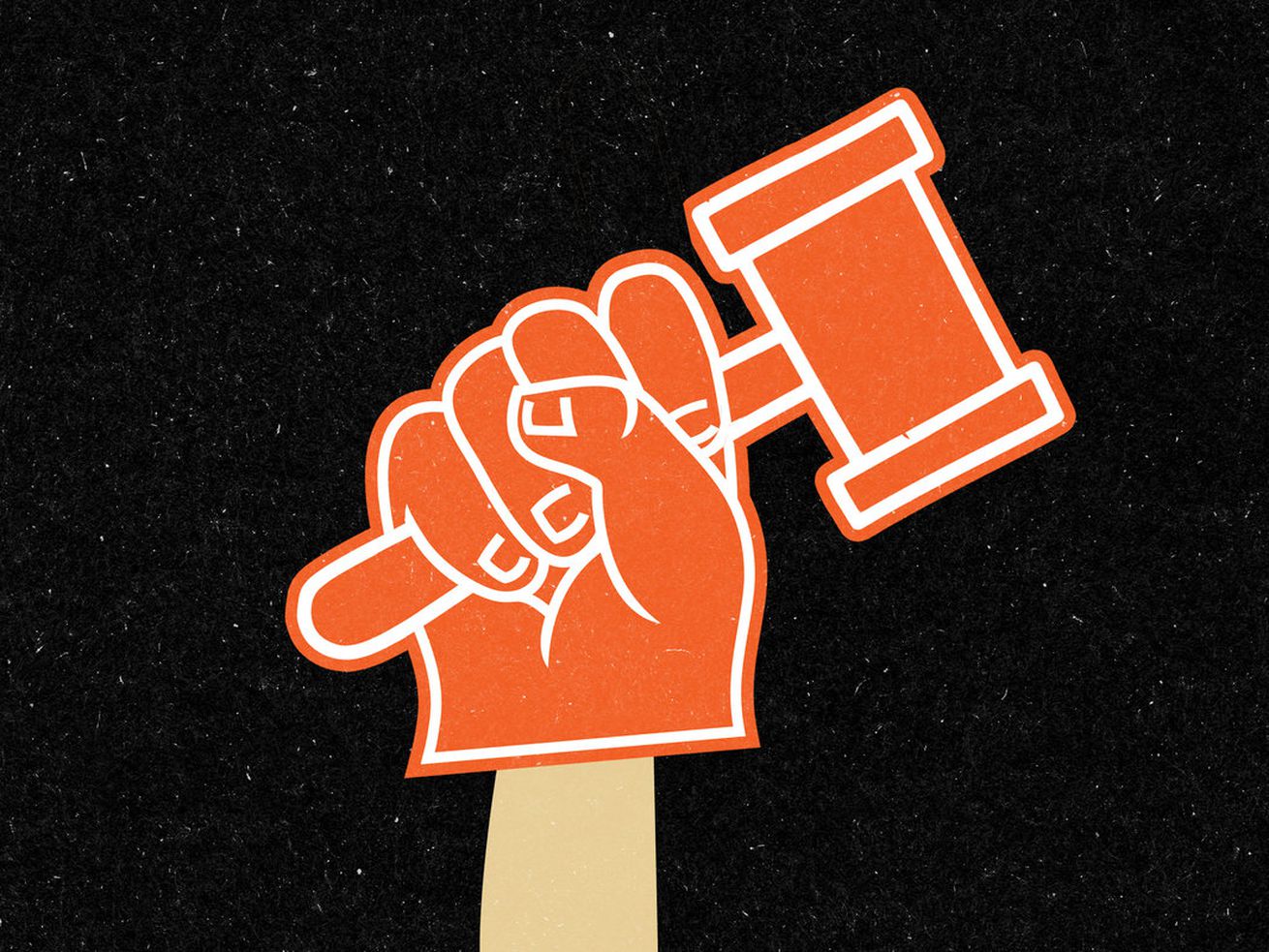 A unanimous ruling from the nation’s highest court might not be a death knell for the NCAA’s business model, but it clearly and devastatingly exposes the facade upon which the entire enterprise rests

The NCAA is an empire built on a loophole the size of a postage stamp. Every palatial college sports stadium or athletic facility across the nation has its foundation built on the concept of amateurism, which legally establishes that because college players are “student-athletes,” they aren’t entitled to financial compensation beyond the value of their scholarship. If you invented something resembling how college football currently operates today, it would instantly be ruled illegal. (And, of course, considered unethical.) But college football has existed in its current form for more than 100 years and a lot of people like it, so the NCAA’s brand of amateurism remains largely unchanged despite so many legal challenges.

But the loophole, and the empire built on it, do not seem long for this world. The Supreme Court issued its decision on NCAA v. Alston on Monday, with justices unanimously ruling against the NCAA. (“The NCAA is big trash” may be the only opinion that Americans of all political views share.) The court’s opinion, authored by Justice Neil Gorsuch, is limited in scope—it applies only to the cap on schools providing cash to players for academic-related expenses, like laptops. It cuts the NCAA’s loophole from the size of a postage stamp down to the size of a paper clip. But a concurring opinion from Justice Brett Kavanaugh argues that the loophole should vanish entirely.

Kavanaugh essentially argues in his concurring opinion that the entire NCAA operation is based on an illegal premise. “The NCAA’s business model would be flatly illegal in almost any other industry in America,” Kavanaugh writes. During oral arguments in March, NCAA attorney Seth Waxman made the argument that the NCAA had a right to define its business model because fans prefer watching unpaid players. (This theory is totally baseless—I, for one, am a college sports fan who would prefer paid players, and I don’t think I’m alone.) Kavanaugh dismantled this logic, writing that “all of the restaurants in a region cannot come together to cut cooks’ wages on the theory that ‘customers prefer’ to eat food from low-paid cooks. … Hospitals cannot agree to cap nurses’ income in order to create a ‘purer’ form of helping the sick. … Price-fixing labor is price-fixing labor.” He adds that “it is not clear how the NCAA can legally defend its remaining compensation rules,” and concludes thusly: “The NCAA is not above the law.”

Kavanaugh clues in on the fact that the NCAA has “built a massive money-raising enterprise on the backs of student-athletes who are not fairly compensated.” In 2020, that became more clear than ever. As the COVID-19 pandemic threatened the concept of spectator sports, college football coaches and university administrators warned that lost revenue from a canceled college football season would have catastrophic consequences for athletic department budgets. “If you don’t have football revenue,” asked since-retired Georgia athletic director Greg McGarity, “where does your revenue come from? It’s a huge void that would create some dire situations.” Iowa State athletic director Jamie Pollard told The Washington Post that “there’s a lot of really smart people out there who will do everything humanly possible to try and find a way to play some or all of the football games” because “if we can’t play any football games … we’d essentially be bankrupt.” A pair of anonymous athletic directors laid the situation plain to Stadium reporter Brett McMurphy: “There better be a season, or many programs will be out of business,” one said. “If there’s no season, we will be fucked,” said another. I figured I would compile all these quotes in one place to make it easy for anybody preparing a new legal challenge against the NCAA’s compensation rules. Clearly, the NCAA’s members view athletes’ bodies as ATMs, despite the NCAA’s assurances that their mission is all about education.

There have been many moments in the past few decades when it seemed like the NCAA’s days were numbered. But there has never been anything like this: a unanimous Supreme Court ruling featuring an opinion that lustily argues that the entire model would not withstand legal scrutiny. Today is not the day the NCAA’s model became illegal—but today, it’s abundantly clear that the organization will soon have to forfeit its facade of legitimacy.

The NCAA is also contending with legislation from numerous states that gives players the ability to profit on their own names, images, and likenesses (NIL)—something the association has long fought. The NCAA never had a good legal argument against NIL, but it was clear why they opposed it: If it became clear that athletes were valuable enough to receive money for appearing in an advertisement, it would be harder to legally argue that they shouldn’t receive money for playing in games. Once individual states began to draft their own legislation in 2019, the NCAA had a chance to step in and revise its own NIL rules. Instead, they have done absolutely nothing two years later, leading to a bewildering patchwork of state legislation in which different things will be legal in different states. The NCAA seemed to hope that Congress would pass a federal NIL law that would supersede all the individual state laws, but of course, that didn’t happen—Congress tends to act pretty slowly. The first of these laws will go into effect on July 1 in six states, and the NCAA will not have its own guidelines in place. The NCAA punted on the opportunity to lead, and these varying state regulations make college athletics less equitable and more confusing.

Toward the end of his opinion, Kavanaugh suggests that the NCAA should resolve its illegal model through collective bargaining with college athletes. If not, the issues with amateurism may have to be fixed by legislation or a future Supreme Court lawsuit. He’s giving the NCAA a warning: The blatant issues with the amateurism model must be fixed, and if the NCAA doesn’t do it themselves, someone will do it for them. So here’s the question that the NCAA has to ask itself in the coming months and years: How do you want to die?

My hope is that the people at the NCAA have some sense and see what’s coming down the pipeline. They should proactively work on a solution that fixes the glaring legal issues outlined by Kavanaugh. There are quite literally billions of dollars in college athletics, most of which should go to the players. There are tough questions to answer, of course: Who gets how much money? Will this new system promote competitive balance, or will it be a free market? How do we prevent less profitable athletic programs from getting cut? How will any new system accommodate Title IX requirements? These questions are tough, but that doesn’t mean we shouldn’t try to answer them. Monday’s ruling makes it clear that the days of the amateurism model are numbered, but it gives the NCAA an opportunity to play a part in shaping the future of college athletics. They can give the athletes a seat at the table and remain in charge of a future version of college athletics in which athletes get fairly compensated.

But of course, the actions of the NCAA have never made sense. The NCAA doesn’t seem to think Monday’s ruling was particularly important—in a statement, an NCAA lawyer downplayed the ruling, and said that Kavanaugh’s devastating opinion carried little legal weight because none of the other eight justices signed on.

Time and time again, the NCAA refuses to budge, even as its position becomes more untenable. They fought NIL to the bitter end, determined to keep athletes from receiving outside money even after it became clear that the NCAA’s side would lose. They fought in the Supreme Court to keep athletes from getting money for academic purchases, even though their argument was clearly legally doomed. The NCAA’s board of governors recently gave president Mark Emmert—a man who has dug in deep to keep the NCAA’s model alive, while also making a lot of other mistakes—a contract extension until 2025. (Like the Supreme Court’s decision, the choice to extend Emmert was also unanimous.) The NCAA remains fatalistically committed to its dying business model. They will happily drown, dragged to the bottom of the ocean with the last pennies they took from this system, rather than share a lifeboat with the athletes who play the games.

The loophole on which the NCAA has built its empire has gone from the size of a postage stamp to a paper clip. Soon it will be a pinhead. The NCAA has the opportunity to uproot the whole thing and rebuild on sturdier foundations. Either that, or it can watch the loophole—and their empire—disappear entirely.